I’m a bit behind with these, so this post will cover a fortnight rather than a week! I plan to switch to monthly updates after week 26 anyway, so will do fortnight ones for these last couple.

What we did: Now that Piper is a bit older and needs less sleep, she is coming out and about with us a lot more. She came with Tom and I to the park on numerous occasions this fortnight. She also went to her first toddler group on Monday 6th Nov (Tom was at nursery but a friend had asked if I would come along). She loved it – really thrived on having all the other kids around. I think she may be my extrovert child because she was in a great mood for the rest of the day. 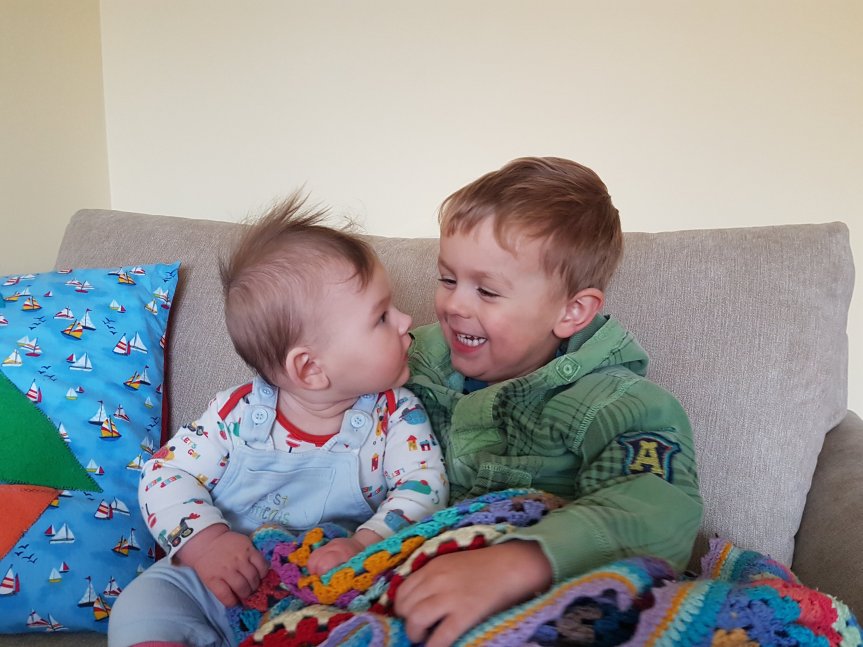 Sadly, Piper came down with yet another cold a few days later. Who knows if she picked it up from the group or from her brother, but she was miserable. Still, she rode along in the sling with us for another few park visits, including discovering a new park with a giant sandpit. She often used the time to catch up on some sleep. 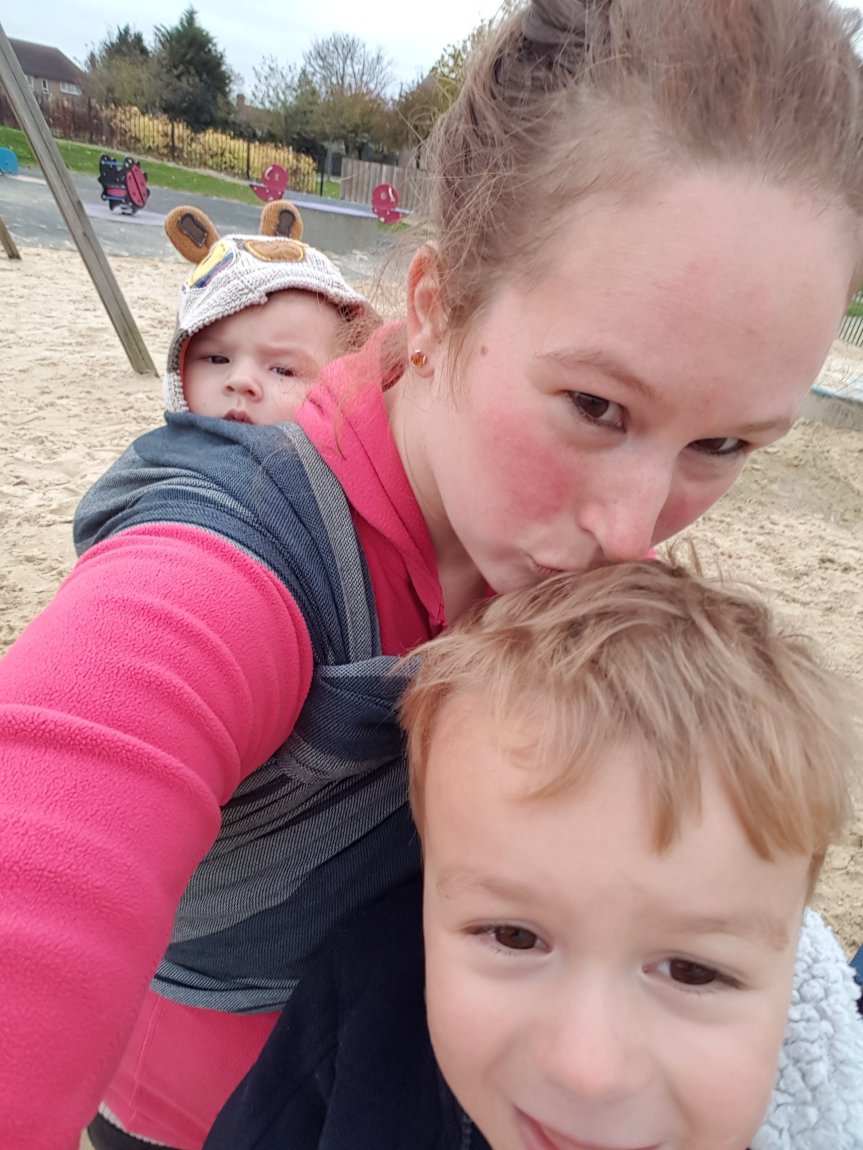 Friday 10th Nov was a rather dramatic day for us. John had a (very) minor operation on Thursday. He’d been fine afterwards, if a bit uncomfortable, but woke up Friday morning shivering and blue, and just kept getting worse. I rang 111, who decided to send an ambulance based on my description and the fact that John could hardly speak to them he was shivering so much. Fortunately he was fine, just had a slight fever from the combination of the operation and catching the kids’ cold, but it was a scary few hours. Piper was her usual ultra easy self, which allowed me to focus on John and reassuring Tom.

Feeding: I hadn’t meant to be weaning Piper so early but she kept eating the food I gave her to play with whilst Tom and I were eating dinner, so I gave in and formally began weaning with her, even though she is not yet 6 months. We do Baby Led Weaning, so technically you can’t wean too early, since if the baby can sit up, put food in their mouth and swallow it, they are ready. Well Piper was definitely ready. She sampled a wide range of foods, including bread, potato, cheese, apple, prunes, carrot, tomato, broccoli, green beans, and pasta. During this fortnight she was only having one meal a day, usually dinner with Tom and I. Our only issue was if she had eaten too much bread, she seemed to get a little constipated, so I’m being careful not to give it to her too often.

Nursing and bottle feeding were both fine. Piper had a good few night feeds this fortnight because she was having difficulty sleeping with her cold. She didn’t actually seem especially hungry and it made no difference to her sleep, but I figure an ill child can always use some extra fluids (plus yummy, yummy antibodies!!)

Sleeping: Piper started off pretty well. She had adapted to the time change and was no longer early waking. Naps were still hit and miss but we were usually getting one good one per day. She was continuing to do her very brief wake ups a couple of times a night, but was just crying out once or cooing and then going back to sleep again immediately. She even slept completely through (or at least made no sound) on Saturday 4 Nov and Tuesday 7 Nov. All very positive… then she caught the cold.

On Wednesday 8 Nov, it started and she woke regularly very congested, but was sucking her thumb and going back to sleep herself each time. But after that we had several nights of hell. She was waking around 3.30/4.00 and not being able to go back down by herself. Feeding her had no effect. There were three nights that I gave up and just took her to sleep with me on the sofa bed. I had the cold too so just wanted us both to be able to get as much sleep as possible. I used to do this with Tom too when he was small, and he would never go back to sleep (but would at least not be crying). Piper, on the other hand, obviously likes having me close because she would go back to sleep until 7am and probably would have slept longer if Tom hadn’t been needing breakfast. I think there may have been some separation anxiety contributing to the wakings, which is partly why this worked so well. Sadly I find sleeping with her very uncomfortable so I aim to keep her in her cot if I can (she is still right by my side of the bed).

Naps were also very disrupted and she was needing to sleep more often too. There were several days where she had four 45 minute naps, plus catnaps in the sling. She managed to sleep through again on Saturday 11 Nov and after that naps began to improve – usually one good one and two shorter ones. Sadly the night improvement didn’t last  – she had bad nights Sunday and Monday (ended up co-sleeping again on Monday). Things then began to improve – she was still waking up and needing help, but I managed to get her back to sleep by stroking her tummy with her in the cot, and once she was back down she would sleep until our normal wake up time.

Working on: Piper has been rolling loads, but for a few days couldn’t get back off her tummy so would cry out for help. Luckily she soon worked it out. She is also able to sit unassisted for a few seconds (I don’t usually get her to do this though since I prefer her to be able to move around freely, which she can do best placed down on her back).

Other things: Piper is still in Wonder Week 5, which I think may be contributing to her poor sleep, especially the difficulty napping.

As I explained here, Piper is strong enough now to be on my back in the sling. She seems to find it pretty comfy up there and often dozes off, although she doesn’t really like the process of being put in the sling if she is tired (she’s fine if she is wakeful).

She was blowing lots of raspberries this week.

She is still finding Tom hilarious and loves being able to sit up with us at mealtimes because he does all sorts of things to make her laugh. 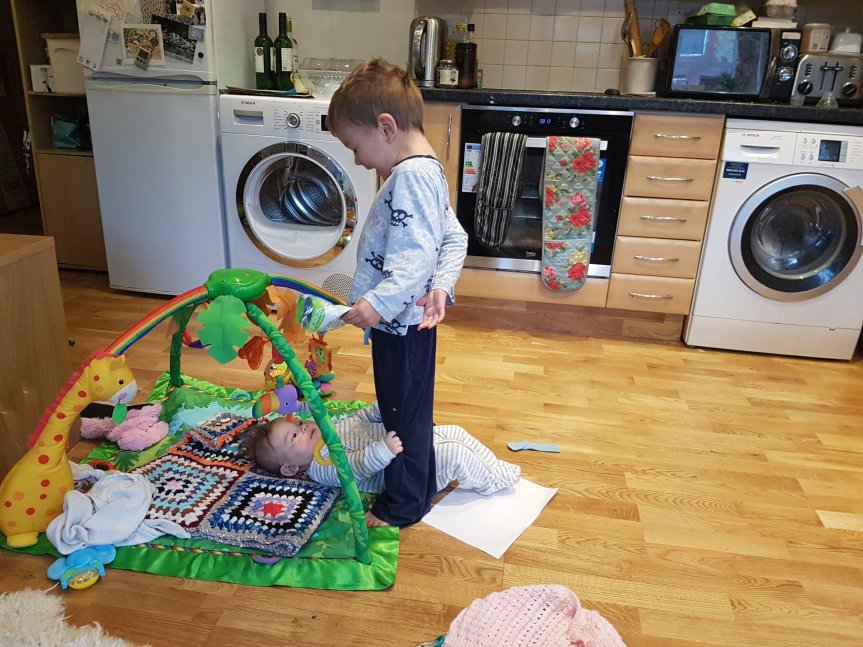 She gets very annoyed if she can’t reach the toy she wants and will shriek until we get it for her.

Schedule: Ha ha ha, what schedule?!? With all the sleep disturbances from her cold, we were really just following her lead this fortnight with naps. However, we kept to the normal bedtime routine and feeds were as follows:

Quite a few night feeds this fortnight, but I’m not sure she actually needed them.