As an anxious new mum, I can remember spending a lot of time worrying about whether Tom was dressed right – too hot? too cold? too hampered by his layers? A well-meaning colleague had handed down one of those gro egg room thermometer thingys, and it seemed always to be telling me that the room was the wrong temperature. Fortunately, it broke after about a month, which was very helpful in lowering my stress levels!

As this is now my second winter with Tom, I hope I’ve learnt a few things about how to dress him appropriately for the weather. In the hope that it might be helpful to other new mums, I thought I’d put a post together comparing what Tom wore as at this time of year as a three month old with what he is wearing now as an active, outdoor fifteen month old.

We had the heating on a lot more this time last year – 6 hours a day compared with 3 hours now. Tom was only able to scoot slowly around on his back though, where as now he never stays still for a moment.

Tom then – long sleeved vest, long-sleeved t-shirt or cardigan, trousers, and a pair of socks, with sock-ons to keep them on. If I was feeling especially lazy, he might have worn a sleepsuit instead of the t-shirt and trousers. Because the heating was on so much, he only needed a jumper indoors on the very coldest days. 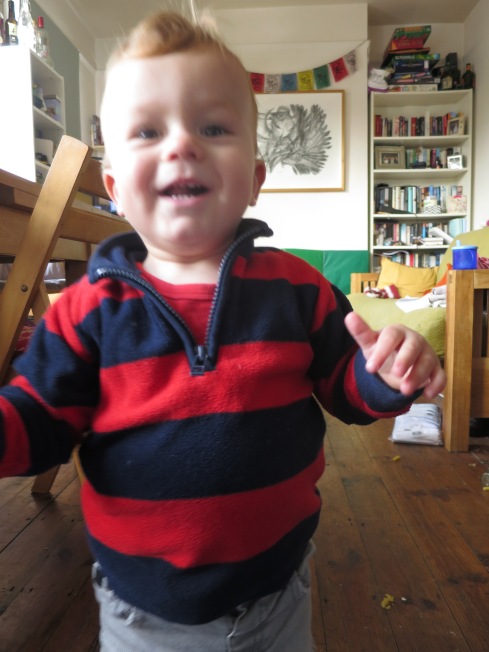 Last year, Tom spent most of his time outdoors snuggled in the buggy or close to me in our wrap sling. We were rarely out for longer than half-an-hour at a time. Tom had just been diagnosed with an inguinal hernia, so we were spending most of our time going to doctor’s appointments and the hospital, trying to get a date for him to have an operation.

This year, we are out for at least an hour each day, often more. Tom either rides in the buggy, on my back in the carrier, or walks/runs by himself.

Tom then – in addition to his indoor clothes, he would wear a jumper and an all-in-one snow-suit, which had built in mittens and covered his feet. Depending on how cold it was, I either added a hat or just put up the hood of the snow suit.  We got him a cosy footmuff for Christmas, but before then he was under a blanket in the buggy, or sharing my body warmth in the sling. We tended not to go out when it was wet, but if we did I’d have the raincover on the buggy.

Tom now – over his indoor layers, I add a thickly lined waterproof jacket. He also wears a hat and his rain footies. If it is especially cold I add mittens (which he takes off and tries to lose), and an extra pair of socks. Sometimes a scarf. We still have the footmuff on the buggy. I struggle to get him into the carrier on my back when I’m wearing a thick coat, so we have been using that less since it got colder. If it rains, I put his hood up and add a pair of waterproof trousers. We still use the raincover if he’s in the buggy. He will soon start wearing shoes if it is especially cold out. 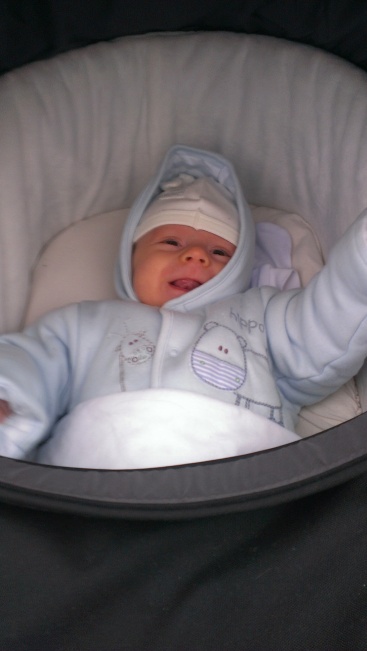 This was the toughest one in the early days. I’d put Tom down warm from his bath, with the heating still on. But whatever he wore had to be warm enough to last him the cold hours of the night, especially as he was still waking several times (every 45 bastard minutes. I’m still traumatised now) Now days, Tom sleeps through and the house isn’t as warm when I put him down, so there is less debate over what to put him in.

Tom then – long-sleeved vest under a long-sleeved sleepsuit. We had some thicker, fleecy ones for especially cold nights. Initially he was swaddled, with one or two of those light weight cellular blankets. The zip on the swaddle broke mid-way through November, so we moved him into a 2.5 tog sleeveless sleeping bag instead (this probably contributed to the night-waking – we should really have kept him swaddled for at least another month). There is a really helpful chart here that I used to use to gauge if he was dressed right.

Tom now – short-sleeved vest under a pair of long sleeved pyjamas or a sleepsuit. Some of his pyjamas have feet, which I tend to use on colder nights. He uses a 2.5 tog sleeping bag, with no sleeves. He also sleeps with a blanket, but as a comforter rather than a cover. It usually ends up underneath him. I sometimes add a pair of socks and his dressing gown when he gets up for breakfast.

No pics sadly – not my first thought when I’m putting Tom to bed!

Babies have cold extremities. If you are trying to judge if they are warm enough, check their back and chest, not their hands or feet.

Babies actually need colder rooms than you would think. A healthy temperature for a nursery is 16-20 degrees Celsius.

The best rule of thumb is to dress your baby in roughly what you are wearing, plus one light layer. So if I am heading out in a t-shirt, jumper, jeans and a coat, Tom will be wearing about the same, but with an additional vest and hat. The footmuff on the buggy makes up for the relative difference in activity between us if he is riding rather than walking along.

For advice on dressing young toddlers for even colder climates, there is a great post here from a mum who grew up in Scandinavia.

For advice on keeping yourself warm on long walks or hikes, see this post from the Helpful Hiker.

Hope you all stay warm this winter – and have plenty of outdoor play!

2 thoughts on “Dressing a Baby in Winter” 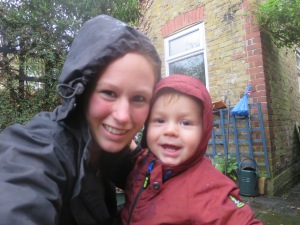